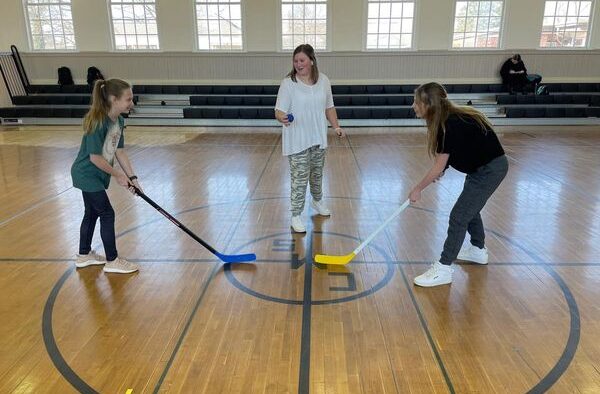 Cullman Middle School students participate in their own versions of the Winter Olympics this year.
Couldn’t make it to Beijing for the 2022 Winter Olympics? That was no problem at Cullman Middle School the past two weeks, as they brought the Olympics to life for students with their own take on key events, plus a bit of schooling on what the Olympics are and what the games represent.
As part of Cullman Middle School’s physical education program, teacher Tracie McPhillips explains they took a hard look at the Olympics to figure out how they could adapt the events for local students, bringing that icy action to life in the admittedly less-icy climes of Cullman, Alabama. Before the Winter Olympics come to a close, CMS students will have participated in their own takes on curling, bob sledding, the luge, hockey and a biathlon.
“It is a bit harder to do the Winter Olympics instead of the summer games, since we are from the South. In other parts of the country they can use the actual snow during P.E., but we’ve had to get a bit more creative with what equipment we have available,” McPhillips explained. “For example, scooters are not something that I would normally use in middle school. But for bobsled and curling? It was perfect. The students definitely have to use their imaginations, but we’re building the best courses we can for them.”
The homegrown Olympics incorporate the Alabama Course of Study for Physical Education, and is an opportunity for students to learn about sports they may have never even known existed before this month.
“Yesterday we did a Biathlon and 99 percent had never even heard of one,” McPhillips said. “They are engaging and really want to succeed to earn the gold medal. We’re also doing some timed events and they want to beat the times the other classes have had.”
To make sure the Olympics don’t stop when the bell rings, the school has also posted a schedule of major Olympics events and where to watch them on TV after school, as well as watching Olympics footage of some of the events the students have been competing in the past two weeks.
“It’s a way for them to see what the real events look like, and how creative we’ve had to be to play it here,” McPhillips said. “By the end, we’ll engage with students to talk about what their favorite new sports are from the Winter Olympics.”
From: Cullman City School

Previous Article
Previous Post
Next Article
Do you have old yearbooks? Cullman High School in need of help