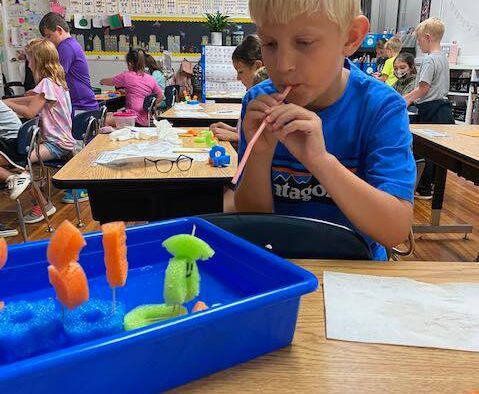 Second-grade students at East Elementary School have recently been reading the children’s classic Where the Wild Things Are by Maurice Sendak, which finds a young boy taking a sailboat on a fantastical adventure. To help float a few of the finer points, students had a chance to build their own tiny boats to see if their design ideas might hold water, too.

Students used small pieces of pool noodles cut into different shapes and sizes to design their own boats to see if they would float and move in a small pool of water without tipping over.

“We talked about sailboats and the basics of how they work and move. The criteria were simple: their boats had to float and when they used the straw to create wind it had to move along the water without tipping over,” East Elementary second grade teacher Sarah Martin explained. “I was pleasantly surprised how successful each group was on the first build.”

In addition to learning about the concepts of buoyancy and balance, Martin said the project was also a team-building exercise, as students had to work together and share their different ideas for how their boats should work.“

The students were learning to cooperate with a partner to create the sailboat even though each person had a different idea,” she said. “They also learned wind power is necessary for sailboats to move. For example, one group had the sailboat tip over and they realized that the boat was not balanced. So they needed to change the design for it to work properly.”

Martin said students were ecstatic to get a chance to play in the water a bit and build their own sailboats, and it was a perfect way to incorporate some Science, Technology, Engineering and Mathematics (STEM) concepts for the end of the year.“

The energy in the room was electric. The students did an amazing job of creating sailboats that were very unique. Some students decorated the boats with faces and named them,” she said. “There were a few that had multiple sails and long hulls. The discussions were wonderful, too. The students were able to identify design flaws during the testing phase and then ‘go back to the drawing board’ to redesign a more successful idea.”