WILL YOU GOAT TO PROM WITH ME? 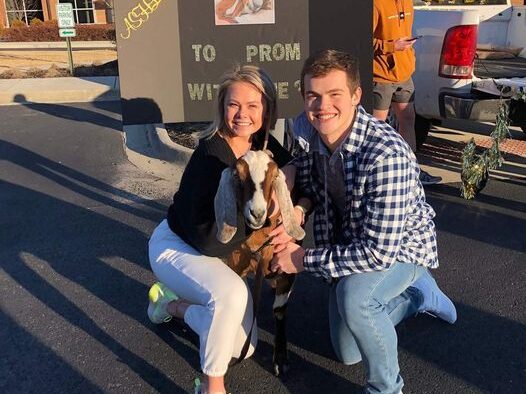 The young lady, Ashlen Heatherly, has a pet goat named Kevin. When Jaden Orr was planning his proposal, including Kevin seemed like a fun idea. With the help of Ashlen’s parents and Jaden’s family and friends, a plan was hatched. At her house, Ashlen found a ransom note letting her know that Kevin had been taken and she needed to follow the clues to get him back safely. The clues were all written as ransom notes and they took her to 5 different places she frequently goes around Cullman. At each location was one of Jaden’s friends with a rose that had a new ransom note attached to it. The clues led her to Platform, Colton Terry’s gym, Heritage Park, Dairy Queen, and the movie theater. The last clue led her to the High School parking lot. There waiting for her was Jaden, his friends that helped with the search, and KEVIN. Jaden’s truck was decorated with balloons, streamers, and a sign asking Ashlen, “Will you GOAT to Prom with me?” After she said “yes” pictures followed and it was Kevin’s chance to shine!