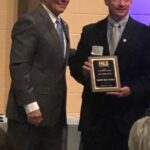 On November 16th, at a banquet held in Montgomery, the Cullman County Sheriff’s Office (CCSO) was proud to once again be the recipient of the PALS Alabama Governor’s Award. The award was presented for the Litter Crew’s continued efforts to keep Cullman County clean. The CCSO was one of only 3 Law Enforcement agencies in the state to receive the award.

The CCSO Inmate Trash Detail crew has picked up 46,098 pounds of trash on 103.2 miles of roadway for the fiscal year 2022. Also, scrap from aluminum cans was sold for for a total of $1,353.19. This money was donated by the Sheriff’s Office to Cullman Caring For Kids. According to that organization, for every $100 they can buy 700 pounds of food.

“The PALS organization here in Cullman County is an outstanding group and we are honored to work with them. The Inmate Trash Detail crew not only helps to keep Cullman County clean, but it also keeps inmates from just sitting in jail. It allows them to be productive and help make a difference. We are so honored to be recognized for the all the hard work that goes into making this possible,” said Sheriff Matt Gentry.
From:CCSO
This post is brought to you by Moss Service Funeral Home. As longstanding members of the Cullman community, we feel passionately about supporting our friends and neighbors.
Moss Service Funeral Home has served Cullman and the surrounding areas with compassion and professionalism since 1882. Here, we are a family—and we treat you as one of ours.