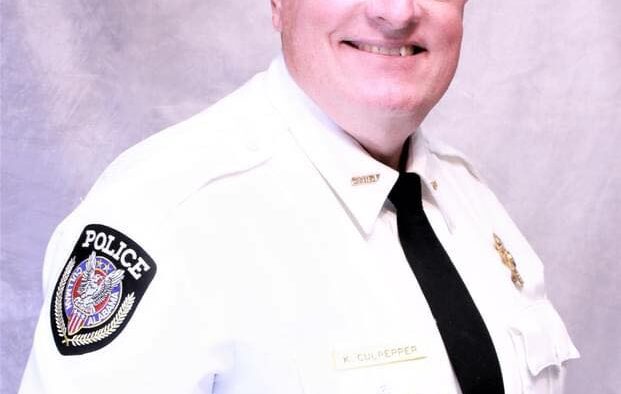 The Mayor and City Council of the City of Cullman extend our best wishes to Chief Kenny Culpepper who is retiring after 44 years with the Cullman Police Department (the last 34 of those years as Police Chief). Today is his last day as Cullman Police Chief.Kenny began his career with the Cullman Police Department in February 1978 and was appointed Police Chief in October 1988. A graduate of Cullman High School, Kenny holds a Bachelor of Science degree in Criminal Justice from Auburn University and a Bachelor of Arts degree in History and Political Science from Athens State University. He is also a graduate of the F.B.I. National Academy and the Northeast Alabama Police Academy and has completed numerous training classes during his career.In addition to his years of service with the Cullman Police Department, Kenny served with the Alabama National Guard’s 20th Special Forces for twenty-one years; served as a board member for numerous organizations including the American Red Cross, United Way, and Cullman Caring for Kids; and is a long-time, faithful, and active member of St. John’s Evangelical Protestant Church.Kenny’s confident leadership skills, unpretentious manner, and humility have allowed him to successfully lead the Cullman Police Department for thirty-four years – through good times and difficult times – while inspiring trust, cooperation, and commitment among his officers and fostering a respectful and compassionate relationship with the community. Through his service with the Cullman Police Department, his service to his church and numerous organizations, and his service with the Alabama National Guard, Kenny represents the very best of Cullman – living his life in humble and devoted service to our community, our state, and our countryThank you, Kenny Culpepper, for your invaluable leadership and for your many contributions to our community. We wish you a long and happy retirement!From: City of Cullman Municipal Government