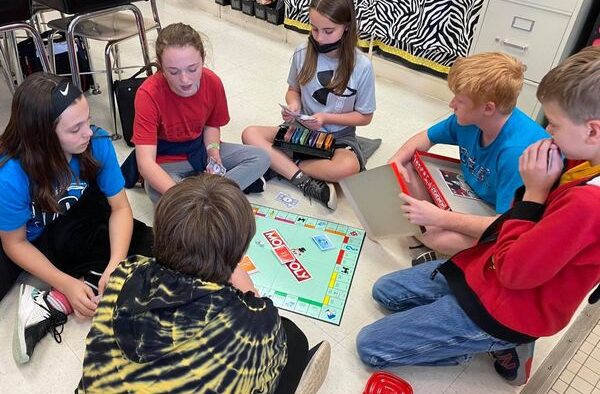 There’s a reason Monopoly has remained a mainstay board game since the 1930s — it’s fun, challenging, and includes some valuable and fundamental lessons about economics and business.
West Elementary School teacher Sharyn Hollingsworth brought those teaching points to her sixth grade class this year with Monopoly Mondays, where students jockey for Park Place and Boardwalk to learn a little more about how real estate and business works in the real world.
“We have just completed a study of big business during the growth of Industry in the U.S. in the late 1800s and early 1900s. We discussed the factors of production and the accomplishments of ambitious business men such as John D. Rockefeller and Andrew Carnegie,” Hollingsworth explained. “Students learned that Rockefeller used horizontal integration to build his empire in the oil industry while Carnegie used vertical integration to dominate the steel industry. Both men created a monopoly in their respective industries.”
Hollingsworth was able to utilize some grant funds from the Operation Round-Up program to purchase five Monopoly games for use in her class, which served as a culminating activity for the course of study.
“The conversations after playing the game were priceless! My money-hungry sixth graders quickly learned the best way to make the most money and ultimately win the game is to own key properties like the railroads, the public utilities, and, of course, Boardwalk,” Hollingsworth explained. “As we reflected on our Monopoly Monday experience, I heard the same comments in every class: ‘The more railroads I own, the more rent they have to pay me!’ and ‘I think my investments will pay off!’ and ‘The more expensive properties bring in the most rent.’”
Hollingsworth said the exercise allowed her students to acquire a better understanding of a monopoly in big business during the Industrial Age in the United States, and they learned beneficial financial life lessons — all while practicing social skills in a friendly competitive situation with their classmates.