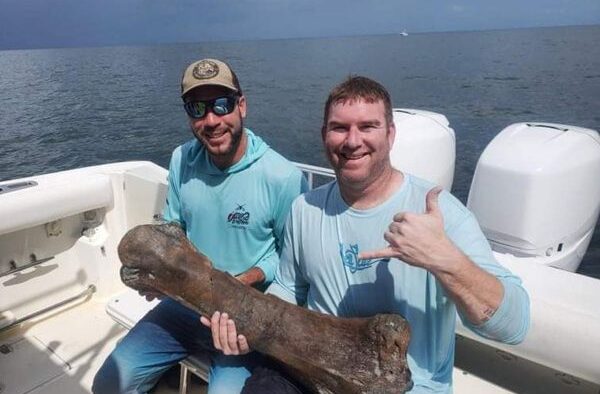 David Brooks of Cullman found this 50lbs mammoth bone on August 7th, 2021. Brooks has been scuba diving for about 2 ½ years. He works for the Cullman City Police department and is on their dive team. Brooks is also an Assistant Instructor through North Alabama Dive Center. Every year NADC owners Eric and Jennifer Parker plan a trip and takes a group to Venice Florida on the hunt for Megladon teeth and other prehistoric fossils.

Brooks never imagined finding something this big. He said he saw a small piece sticking up from the sand and tried fanning the sand away and noticed it was a lot bigger than he expected. He then went to digging trying to get the bone out. He used his dive knife and finally after about 45 minutes got the bone loose. Then he got help from Cody Hipp, another diver that was close by, and got it back to the boat. Once in a lifetime find!!!

Brooks says its not uncommon to find Megladon or other Prehistoric shark teeth. We even find Mammoth teeth and sometimes parts of a mammoth tusk but we have never found a leg bone. Mammoths inhabited Florida between 2.6 million and 10,000 years ago. The Columbian mammoth is a distant relative of the Asian elephant that inhabited Florida during the Pleistocene era. Growing up to 13 feet tall and weighing more than 10 tons, the Columbian mammoth was one of the largest mammoth species.

It roamed the Western Hemisphere from the northern United States down to Central America. Mammoths, along with most Pleistocene megafauna, began going extinct about 14,000 years ago. While they overlapped with the first humans in North America for several thousand years, it’s not clear if climate change, overhunting, or other factors led to the extinction of Columbian mammoths.