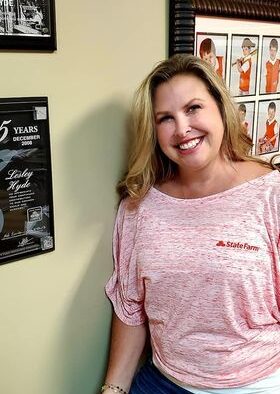 Today, local business owner Lesley Hyde helped to locate a man with dementia that had gone missing. She credits the happy accident to God’s plan and an almost supernatural intuition.“Out of the blue around 1:00 pm I started getting Facebook messages from a man I didn’t seem to know. This sometimes happens and it may be someone with not so good intentions. But something in my gut told me something was different about this message. I opened it up and it was a man who I didn’t recognize knowing but he had written me in detail knowing about me in College at UAB way back in 1991 and knew all the information about The UAB Golden Girls Dance team I was a part of. He knew specific details. He was really being nice asking if I remembered so and so etc. – but something was overwhelming me and telling me that this man was in trouble that something was wrong. A severe rush of sadness came over me and deep concern for this man . He ended the message with where and what he was doing and told me to have a great day. That was at 1:15 then as I was getting ready to leave my Phone Alerted me at 1:20 of the missing man in Cullman and it gave his name. I was shocked when it was the same name of the man who I had just been in contact with me and chatting with me on Facebook Messenger. I knew right then and there I had looked at that Message for a Reason and it was God that was working in a mysterious but awesome way! I immediately called the Sherrifs office and told them I had been in contact with him through his random messages he had sent me. I was so happy to tell them and they were telling me to keep in contact with him etc. I’m so happy that I could give relief to his family that I had just had contact with him. He called me but hung up then we corresponded more and I tried to keep him messaging me trying to get him to tell me where he was but he wouldn’t tell me. About 10 minutes later the Sheriff’s department called me thanking me so much for my help and everyone was so happy he was found! I’m just ecstatic that this random message came over to me and I do feel it was God’s work and The Guardian Angels were definitely doing their jobs sending messages! I am so happy to have been able to help in this random way but God works miracles and prayers are definitely answered! I’m am beyond elated to know he was reunited with his family! Life has been rough and tough for folks especially the past year … including myself. I am so happy this was a happy reunion. I thank God for letting me help in any way I could! Praise God! Just please make sure you always follow your instincts. In today’s world, it’s so easy to get caught up in being busy and not paying attention to things. Stop and pay attention and you might just end up helping in some way for the good.” – Lesley Hyde